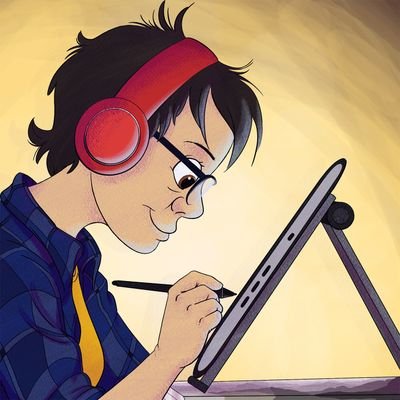 We caught up with Christina Nerland

Norweigian-born, London-based Christina Nerland is a 2D animator and story-boarder specialising in hand drawn character and effects animation. Christina’s work caught our eye (and had us well and truly hooked) when she submitted a speculative job application. Conceptual and character-led, her work is as thought provoking as it is visceral.

So far, Christina’s collaborated with us on our BBC Ideas project, enhanced IMAX – Shazam with special effects and animated IMAX – Rise of Skywalker with Harriet Gillian.

As well as enhancing our studio with her energy and enthusiasm, Christina is a true team player; she instantly took a shining to our resident canine, Lemony, and embraced Yonder’s climbing wall!

We caught up with Christina to find out more…

Hi Christina! How did you get to where you are right now?

“I’ve been wanting to be an animator since I found out it was a job at five years old. I studied for my BA in animation in my home country of Norway but had trouble finding any work after graduating. I had been advised to get an MA or at least move abroad to get some work experience from established Norwegian animators as it would be very hard to come by any junior positions in Norway at the time.

So in 2014 I started on my MA in character animation at Central Saint Martins in London, graduated in 2016 and have been working here since. I’ve been working at several different studios, both big and small, like Nexus, Moth, Lupus Films, BlinkInk and Kong.”

What are you working on?

“Currently I’m working at Moth as an assistant animator. Alongside work I’m finishing up my second animated short film and have started to think of the third one. I’m also looking into the chance of turning my previous short film into an illustrated children’s book.”

What are you looking at?

“Right now I’m looking at the illustrations by Zoe Persico who I just discovered a few days ago. I’m currently also very occupied with everything linked to Klaus. Another film I recently saw that I thought was truly amazing was I Lost my Body which I highly recommend.”

Kong is dedicated to supporting the collaborating artists that keep our business progressive and our clients happy.

To read more about our collaborators please see our Kong Troop.